By communication imbalance we refer to the situation where the amount of MPI calls or the message sizes change between processes. Of course the time taken by these communications depends on many factors, of which the number of calls, message sizes are important but also the type of MPI call (blocking or not) or the location of the processes involved in the communication (local within the node or remote).

Communication- or load- imbalance are sibling patterns. They start the very same behaviour in their executions that will finally paid in the next synchronization phase (if it is not compensated before).

The following figure illustrates the previous example by means of the OpenFOAM toolbox, providing two different semantics: above the sequence of MPI calls, below the useful duration of the computational phases. 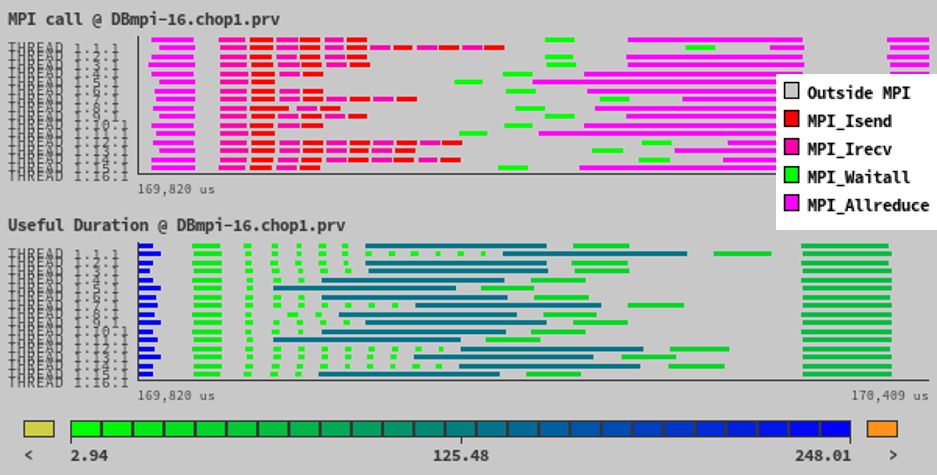 Previous trace shows how each process executes a different number of MPI_Isends and MPI_Irecvs. The computation after these MPI calls is actually balanced across processes and the delay introduced at the Isends/Recvs is propagated. The imbalance originated at the Isend/recv phase is globally paid much later, at the next collective call: MPI_Allreduce in this case.

The following figure also shows the imbalance effect in the CP2K application. The trace shows the sequence of MPI calls executed by the different threads:

In this case we see how some processes do perform many more Isends/Irecvs than others following a regular pattern. Processes not performing the large sequences of Isends/recvs do spend their time waiting at MPI_Waitany calls. In addition, the imbalance issue is exacerbated by the fact that the communication pattern results in a serialized pipeline of the communications. In fact, this serialization effect is even more important than the imbalance effect shown in that trace.